I know I’m sounding like a paid hack for the K Scope label, but honestly, they are putting out the most amazing music these days. The latest release to grab me and not let go is Anathema’s We’re Here Because We’re Here. Quite simply, it is an extraordinary work, full of spiritual struggle and hope. Click here for a far better review than I could hope to write.

I ordered the 2-disc set from their website (click on the picture above), which includes a DVD-A with a 5.1 surround mix that is stunning. I haven’t stopped listening to it for 3 weeks now. 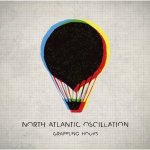 I know it’s early into 2010, but I received North Atlantic Oscillation‘s debut album, Grappling Hooks,  a few days ago direct from the UK (what did we do before the web?). It has taken complete possession of my cd player, iPod, and car stereo. It begins with a two-minute track (Marrow) that sounds like it’s going to be a boring, drawn-out intro until some heavy drums kick in, and suddenly everything is blasting at once – drums, bass, guitar, synths, and an irresistible vocal hook. Just when you think it can’t get any better, it’s over. What follows are 10 songs that alternate between soft, Floyd-like passages, and full-bore synth & guitar aggression. The final track (Ritual) is a 7-minute epic that begins with chaotic mishmash of noise that gradually takes shape until it settles into a beautiful piano & vocal melody that inexorably builds into a pounding crescendo. There is a hidden 45-second track to close that is reminiscent of Brian Eno and Harold Budd’s mid-80’s work. All in all, a near-perfect album.

Okay, time for highlighting yet another band on the K-Scope label: North Atlantic Oscillation.  These guys have a very nice sound that is reminiscent of 1970’s British prog (Alan Parson’s Project, I kid you not!) filtered through early-90s Shoegaze (Slowdive, Ride, etc.). Highly recommended.

Another band on the K-Scope label is Engineers. They remind me of  My Bloody Valentine, but with a lighter touch – like early Lush.  Track 6 of their 2009 disc Three Fact Fader, “Hang Your Head” is a beautiful monster of a song. (Listen to  it here.)

The video below is for the closing cut, “What Pushed Us Together”:

I love the mandala-like effects in the intro. They look like deep zooms of the Mandelbrot Set.